“To Understand Europe’s Immigration Crisis, Listen to the Voiceless ‘Illegals'”

“New Efforts To Block The Growing Threat Of ISIS” 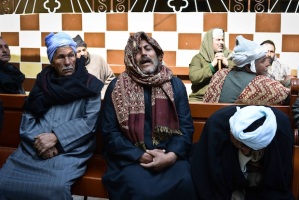 Kurdish fighters in northern Iraq have reportedly, for now, beaten back an assault by ISIS. Earlier this week Egyptian warplanes dropped bombs on Islamic state targets in Libya. That attack was in retaliation for the apparent beheading of 21 Egyptian Coptic Christians. The video which allegedly verifies these murders suggests that the extremist group is expanding its reach beyond territory it already controls in Iraq and Syria. Many say the U-S and other western nations are failing to appreciate the growing threat of ISIS and the need for a strong military response. Please join us to discuss the threat of ISIS. 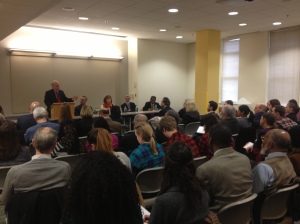 The American University (AU) community, His Excellency the Ambassador of Iraq to the United States, prominent Pakistani officials, friends, and supporters came together February 10 to hear Ambassador Akbar Ahmed’s findings from the field in the Journey Into Europe project.

Ambassador Ahmed, the Ibn Khaldun Chair of Islamic Studies at AU and the former Pakistani High Commissioner to the U.K., reported on findings from his extensive fieldwork in Europe over the past two years, coming off the heels of a final leg of research in Denmark, France, and Italy during the winter.

Distinguished guests of this important lecture included Ambassador Lukman Faily, Iraqi Ambassador to the U.S., and his wife, Mrs. Fally, Brigadier Chaudhary Sarfraz Ali, Defense and Army Attache of the Pakistan Embassy in Washington, Pakistani Senator Akbar Khwaja, Dean Louis Goodman, Dean Emeritus of SIS, Ann Kerwin, wife of AU President Cornelius Kerwin, Brooke Beardslee, president of the SOAS Alumni Association of America, and Paul Smith, director of the British Council U.S.A. Dear friend of the project Begum Kosar, who hosted a dinner for the Journey Into Europe team in her home in McLean, Va. in March 2014 to launch the project, also attended the lecture with her grandson…