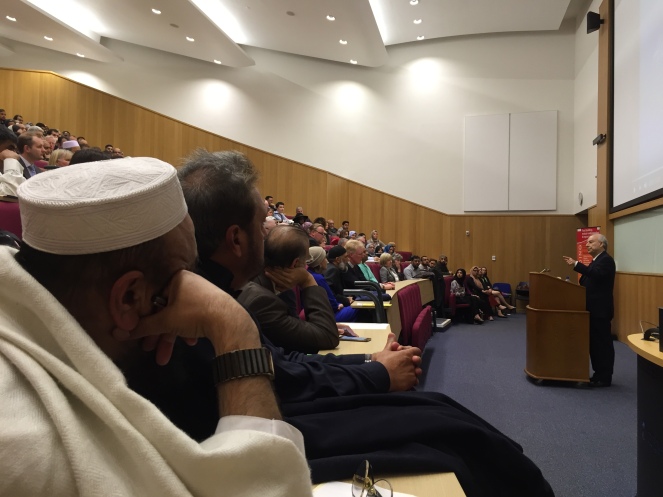 Ambassador Ahmed lectures to a packed hall at the University of Nottingham.

As part of his current lecture and film screening tour, Ambassador Ahmed visited Nottingham, England, where he spent several days meeting the local Muslim community and giving several lectures at the University of Nottingham. Nottingham, a city of around 300,000 people, has about 25,000 Muslims.

Ambassador Ahmed’s visit was co-sponsored by the University of Nottingham and the Karimia Institute, a large Muslim organization and charity based in Nottingham. When Ambassador Ahmed and his team arrived at the train station, they were received by a delegation of the Muslim community, including Dr. Musharraf Hussain, a prominent Islamic scholar and Chief Executive Officer of the Karimia Institute. Ambassador Ahmed and his team were welcomed by the Muslim community in an unending series of dinners and warm hospitality. There was also a tremendous amount of goodwill between the Muslim community and the faculty and students of the University of Nottingham, which was remarkable, and a great spirit of enthusiasm and excitement among the many people brought together by these events to meet and have dialogue with each other.

For most of the world, Nottingham means Robin Hood and Sherwood Forest, and Dr. Hussain drove Ambassador Ahmed and his team to Sherwood Forest to see the famous “Major Oak” tree associated with Robin Hood. At the tree, which is believed to be as many as a thousand years old, Dr. Hussain said that Robin Hood represented the “human desire for fairness and justice” and called him “the protector, savior, and helper of the poor people.”

Dr. Hussain also expressed his desire for interfaith dialogue and friendship in his discussion of the initiative he and other top British imams are taking to celebrate the 90th birthday of Queen Elizabeth II this year on June 10, which falls on a Friday during Ramadan, by saying a prayer for the Queen during Friday prayers. Dr. Hussain called the Queen “a great role model” and “a wonderful lady in every sense” with “64 years of incredible service to humanity and to this country.” “We as Muslims who live in her wonderful realm,” he said, “appreciate her service and her work and this will be a way of thanking her for what she has done for us.”

On May 24, Ambassador Ahmed delivered a lecture titled “Muslims in Europe: Opportunities and Challenges” to a packed hall of around 400 people at the University of Nottingham. The event was opened by Professor Jon Hoover, who teaches Islamic studies at the university and helped arrange and coordinate Ambassador Ahmed’s visit. Ambassador Ahmed was introduced by Professor Katharine Adeney, the Director of the Institute of Asia and Pacific Studies at the university, who said in her introduction that in the 1990s when she was working on her PhD she was inspired by Ambassador Ahmed’s Jinnah book and film and said she couldn’t believe she was now meeting him.Professor Adeney also said that she had been at the university for many years and had never seen an audience as large as it was that evening. There were many distinguished guests present, including the pro-vice-chancellor of the university, who welcomed guests to the lecture, senior professors, and Colonel Stuart Williams, the deputy commander of the famous “Desert Rats” 7th Armoured Brigade who the next day bestowed the honor of “honorary Desert Rat” on Ambassador Ahmed.

On May 25th Ambassador Ahmed, who stayed in the huge and stately Hugh Stewart Hall on the beautiful University of Nottingham campus, considered the “greenest” in the world, spent much of the day at the Karimia Institute with the Nottingham Muslim community. Ambassador Ahmed spoke at a press conference in the institute convened to launch Dr. Hussain’s new Trust Building Project, in which trained “ambassadors” from the Muslim community will go out into the wider community in order to forge relationships with non-Muslims and dispel myths about Islam. The event was well-attended by local media and the Muslim community. Ambassador Ahmed was also interviewed for over one hour in Urdu on Radio Dawn, a station serving the local Pakistani community that broadcasts from the Karimia Institute.

There was a feeling that this trip was a catalyst. The visit had accomplished something that had never existed before, bringing the university and the Muslim community very close together. Ambassador Ahmed’s message of promoting interfaith dialogue and friendship resonated with Muslims and non-Muslims alike. As a final gesture of appreciation, an electrical engineer of Pakistani background living in Nottingham personally drove Ambassador Ahmed and his team in his Mercedes to their next stop, Bradford, England, a three hour trip, and refused to accept any payment, repeating that it was an honor for him to drive Ambassador Ahmed. It was a remarkable conclusion to a wonderful and hopeful few days.

Ambassador Ahmed speaks at a formal dinner in the Council Room at the University of Nottingham.

In Nottingham, Ambassador Ahmed was declared an “honorary Desert Rat” by Colonel Stuart Williams, the deputy commander of the 7th Armoured Brigade, known as the “Desert Rats.” The Desert Rats are a legendary regiment in the British Army honored by Winston Churchill and the German general Rommel alike for their historic role in the North African campaign during World War II.

Journey into Europe to screen at the Bradford Literature Festival, Saturday, May 28, 6p

Anthropologist, Islamic scholar and filmmaker Ambassador Akbar Ahmed explores Islam in Europe and the place of Islam in European history and civilization in this unprecedented study. Shot across the continent in countries including Germany, the UK, France, Spain, and Bosnia, the film introduces us to people from all walks of life: presidents and prime ministers, archbishops, chief rabbis, grand muftis, heads of right-wing parties, and everyday Europeans from a variety of backgrounds.

Join Ambassador Akbar S Ahmed, the Ibn Khaldun chair of Islamic Studies at American University in Washington, DC, for a Q&A after the film. 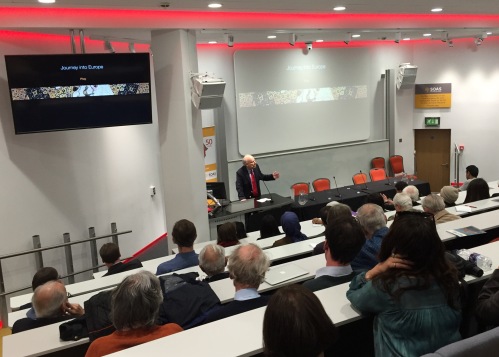 Ambassador Ahmed addresses the audience prior to the Journey into Europe screening.

On May 21, Ambassador Ahmed spoke at a screening of Journey into Europe held at the School of Oriental and African Studies (SOAS) in London to a packed hall. The event was hosted by two key partners and patrons of the Journey into Europe project, Professors Amina Yaqin of SOAS and Peter Morey of the University of East London. Attending the screening were distinguished guests including His Excellency Syed Ibne Abbas, the Pakistani High Commissioner to the UK, as well as prominent figures who appear in the film including Sir Nicholas Barrington, the former British High Commissioner to Pakistan, the author and activist Kristiane Backer, and Mohsin Akhtar, the owner of Heydon Grange golf course and farm outside of Cambridge. The film received a very enthusiastic response from the audience. Frankie Martin, who is leading the research team for the project and is the associate producer and assistant editor of the film, joined the panel discussion for the question and answer session following the screening and shared his experiences and ideas working on the project.

The occasion had added significance for Ambassador Ahmed because he received his PhD at SOAS, in 1978. Ambassador Ahmed’s PhD tutor, Adrian Mayer, was in the audience for the film. The previous evening, May 20, Ambassador Ahmed gave the Annual Lecture, “ISIS, Paris, Pakistan and the search for peace: conversations with an Islamic scholar,” also to a packed hall, which was moderated by the prominent political theorist Lord Bhikhu Parekh. Among the audience attending the event, which was also received very enthusiastically, were many SOAS alumni. Prominent guests included Sir Nicholas Barrington, Justice Khurshid Drabu, the first secretary and the defense attache at the Pakistan embassy, Jonathan Benthall, the former Director of the Royal Anthropological Institute, and many others. 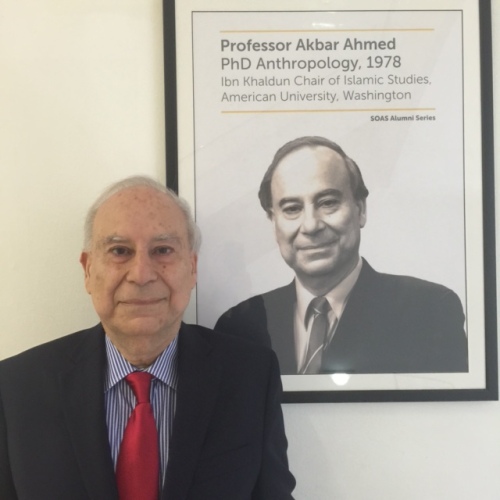 Ambassador Ahmed poses next to his portrait on the SOAS “hall of fame” for distinguished alumni.

Amb. Ahmed calls on US Deputy Chief of Mission in London to discuss Journey into Europe 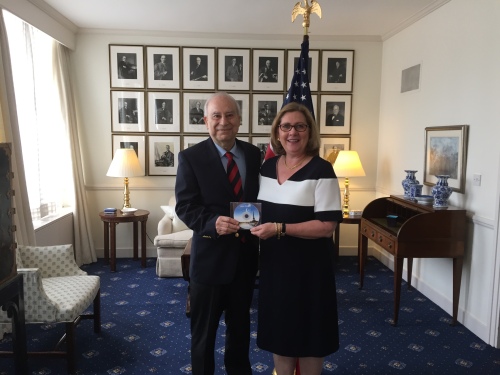 On May 19, Ambassador Ahmed visited the US Embassy in London and called on the US Deputy Chief of Mission, Elizabeth Dibble, in order to discuss the Journey into Europe project and present a copy of the film. Ambassador Ahmed had previously met Ms. Dibble last year at an important conference on Islam hosted by the Ditchley Foundation outside of Oxford. Ms. Dibble appreciated the project and its aims and was delighted to receive the film. Also attending the meeting was Mohsin Akhtar, the owner of Heydon Grange golf course and farm outside of Cambridge, Frankie Martin, a member of the Journey into Europe team, and Anneliese Reinemeyer, the Cultural Affairs Officer at the US Embassy in London, who will also attend the screening of Journey into Europe at the School of Oriental and African Studies in London on May 21.

Journey into Europe to launch in Berlin at Hackesche Höfe Kino, June 1 at 5p, hosted by Stiftung Mercator

Join us on June 1 at 5p in Berlin for the European film premiere of Journey into Europe at hackesche höfe kino, sponsored by Stiftung Mercator, in conjunction with the Aspen Institute Germany and the British Council.

Please be sure to RSVP by May 27 to journey.europe@stiftung-mercator.de. 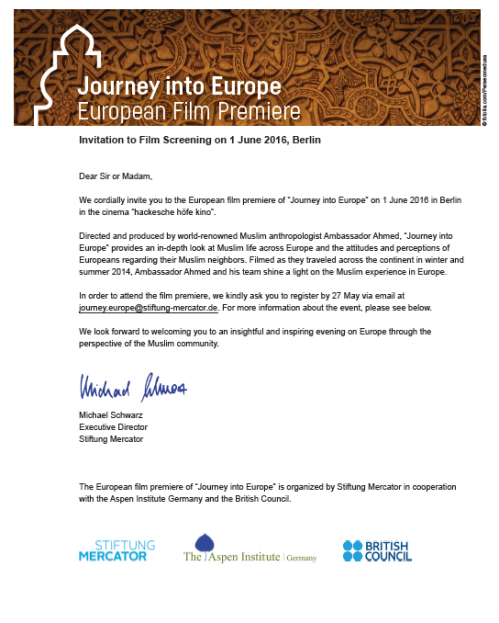 Journey into Europe to screen at SOAS, University of London, May 21 at 5p

Journey into Europe, by world-renowned scholar Akbar Ahmed, was filmed across the European continent and explores Islam in Europe and the place of Islam in European history and civilization. Along the way, we hear from some of Europe’s most prominent figures – presidents and prime ministers, archbishops, chief rabbis, grand muftis, heads of right-wing parties, and everyday people from a variety of backgrounds. Startling, challenging, and emotionally powerful, the film’s themes of identity and acceptance are critically relevant to our world today.

Reviews:
‘A journey through hearts and minds‘ – Tariq A. Al-Maeena
‘Taking the Temperature of Trump’s America: The Power of Pluralist Dialogue Perseveres‘ – Patrick Burnett

Journey into Europe to screen at the Wilson Center, Wed. May 11, 3pm

Ambassador Akbar Ahmed, a world-renowned anthropologist, Islamic scholar, and filmmaker, explores Islam in Europe and the place of Islam in European history and civilization in this unprecedented study. In the film shot across the continent in countries such as Germany,the U.K., France, Spain, and Bosnia, we hear from some of Europe’s most prominent figures, including presidents and prime ministers, archbishops, chief rabbis, grand muftis, heads of right-wing parties, and every-day Europeans from a variety of backgrounds.

The film showing will take place on Wednesday, May 11 from 3:00 pm-5:00 pm and is co-sponsored by the Asia Program, the Middle East Program, and the Global Europe Program of the Woodrow Wilson International Center for Scholars.

– See more and register at: https://www.wilsoncenter.org/event/film-journey-europe-islam-immigration-and-identity#sthash.au5sDwrS.dpuf