Journey into Europe has mainland Europe premiere in Berlin

Ambassador Ahmed and Kristiane Backer speak at the European continental premiere of Journey into Europe in Berlin.

On June 1, the European continental premiere of the Journey into Europe film was held in front of a full house audience at the Hackesche Höfe Kino cinema in Berlin. Ambassador Ahmed introduced the film at the screening, which was co-sponsored by Stiftung Mercator, the principal backer of the project, the British Council, another important backer of the project, and the Aspen Institute Germany. The event was hosted by the author and activist Kristiane Backer, who also moderated a Q and A with Ambassador Ahmed following the screening.

The Executive Director of Stiftung Mercator, Michael Schwarz, addressed the audience at the screening and in his remarks spoke very warmly about the project and congratulated the team. Rachel Launay, the Germany director at the British Council, also spoke. There were many distinguished guests present, including Anna Kuchenbecker, the Deputy Director of the Aspen Institute Germany, Dr. Klaus Mueller, the United States Holocaust Memorial Museum’s Representative for Europe, Philomena Poetis, representing the Pakistan Honorary Counsel General in Munich, and Brigadier General Asif Adnan Jah Shad, the Defence Attache at the Pakistan embassy in Berlin. All spoke enthusiastically about the film and wanted it shown and circulated widely in venues like schools and centers.
The day following the screening, H.E. Jauhar Saleem, the Pakistani ambassador to Germany, hosted a grand dinner for Ambassador Ahmed at a top Turkish restaurant in the city and invited many distinguished guests. Ambassador Ahmed and the team were also able to do some fieldwork for the upcoming Journey into Europe book, visiting one of Berlin’s most famous landmarks, the Kaiser Wilhelm Memorial Church on the Kurfürstendamm. 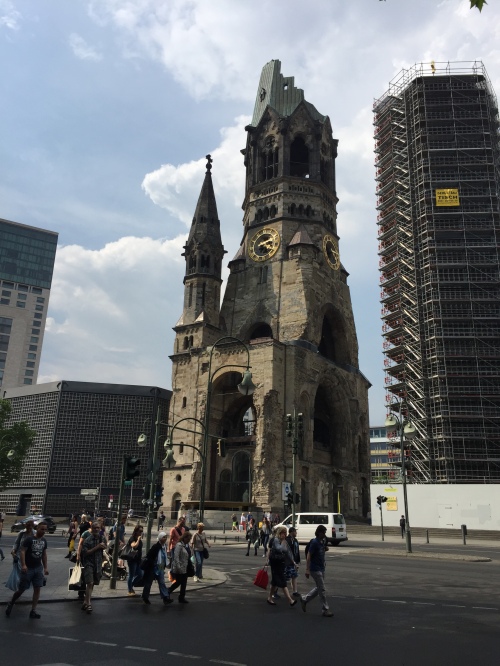 This entry was posted in Videos. Bookmark the permalink.