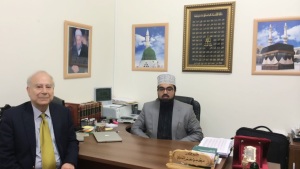 On the 31st May 2014, Prof Akbar Ahmed and his team of Researchers visited the Al-Mustafa Islamic Centre Ireland to interview the Imam and students of the Islamic School for the research project :“Journey into Europe; Islam, Immigration& Empire”.

Professor Akbar Ahmed is probably the world’s best known scholar on contemporary Islam. He is the former High Commissioner of Pakistan to Great Britain, and has advised Prince Charles and met with PresidentGeorge W. Bush on Islam. He is now Ibn Khaldun Chair of Islamic Studies and professor of International Relations at American University in Washington, DC.

Professor Ahmed is the author of many books on contemporary Islam, including Discovering Islam: Making Sense of Muslim History and Society, which was the basis of the BBC six-part TV series called Living Islam. His Postmodernism and Islam: Predicament and Promise was nominated for the Amalfi Award, and his “Jinnah Quartet,” a four-part project on Pakistan’s founding father, M.A. Jinnah, has won numerous international awards. He is currently the chair of Islamic Studies in American University of Washington.

Shaykh Dr. Muhammad Umar Al-Qadri thanked the esteemed Professor for his visit and the offer of interviews for the purpose of the significant research. Shaykh said…