The Institute of Strategic Studies Islamabad (ISSI) hosted the official Pakistan launch of Journey into Europe on December 23, drawing a high-profile capacity crowd featuring elite members of Pakistan’s diplomatic corps and top Pakistani scholars. Hosted by Ambassador Masood Khan, Director General of the ISSI and former Pakistan Ambassador to the U.N. and China, and featuring Chief Guest H.E. Mr. Sartaj Aziz, the Prime Minister’s Adviser on Foreign Affairs — Pakistan’s equivalent to the Office of Foreign Minister, keynote speaker Dr. Amineh Hoti, Executive Director of the Markaz-e-Ilm Center for Dialogue and Action, and Ambassador Khalid Mahmood, Chairman of the Board of Governors of ISSI and former Pakistan Ambassador to China, Saudi Arabia, Iran, Iraq and Mongolia, this screening highlighted the importance of mutual respect and understanding in fostering peace between Muslims and non-Muslims not only in Europe, but around the globe.

I thank you for accepting our invitation to watch with us the film Journey into Europe, produced by a brilliant intellectual and an outstanding thought leader of our times – Dr. Akbar S. Ahmed.

Dr. Ahmed needs no introduction in Pakistan, the Middle East, the United Kingdom, Europe and the United States. Currently the Ibn Khaldun Chair of Islamic Studies, American University in Washington, D.C., he has contributed to and shaped contemporary thinking on the relations between the Muslim and the Western worlds. In that sense, he is a communicator and conduit between East and West.

Today we are going to watch a fascinating documentary covering relations between Muslim world and Europe spanning many centuries, starting with the period of Muslim presence in Andalusia and Sicily, tracing the Ottoman expansion into Europe, and understanding the more recent era of colonization and immigration. But this documentary is not about history, but about pressing contemporary issues of multiculturalism in Europe, cross-fertilization of the Islamic and European civilizations, stereotyping, Islamophobia, terrorism and violent extremism.

The message of the documentary is not despondence but hope. It explores how Christians, Muslims and Jews can live together and promote harmony and peace.

After the Paris terrorist attacks, some existential questions have emerged.

Europe and Islam are not quintessentially different or disparate. We see many parts of Europe steeped in Islamic civilization, whose culture, language, architecture and knowledge has left an indelible mark on modern European thought and renaissance. Similarly, Europe has left a strong imprint on the Middle East, Africa and Asia and shaped Muslim worldview. So an interface of cultures already exists.

Today it is our collective responsibility to stop the hand of the terrorist from hurting Europe, its people and its cities. We have to work together to frustrate the murderous designs of the masterminds of terror, repulse their attacks and destroy the entities that support them. At the same time, Europe has to restore self-confidence to stop incitement to hatred against Muslims living in Europe.

It is clear that as Hitler, Mussolini, Milosevic and Karadzic do not represent Europe, Baghdadi and Osama Bin Laden do not epitomize, or speak for, Muslims and Islam. They are not us. Criminals and terrorists are not us either in Europe or the Muslim world.

There is no use pretending that this problem – the strained relations between West and Islamic world – does not exist. It exists. We need a continuing self-healing process in Europe so that situations that led to the atrocities committed during the interwar period of the last century and the Second World War are not repeated, this time targeting Muslims. And the Muslim world needs its own reformation to turn the tide of violent extremism that threatens the Islamic and Western countries.

This is not just about crafting narratives but changing reality on the ground by embracing tolerance, moderation, co-existence and scientific innovation. On the political side, the international community must find ways to resolve the issues of Jammu and Kashmir and Palestine.

Let’s focus on commonalties between Muslim and European worlds and try to build on them to save our world from strife and conflict and steer it towards shared prosperity. Pakistan wants to be a crucible for that transition for integrating humanity.

But Dr. Ahmed’s Journey into Europe is about Europe. It is about how Europe should be more cohesive, more coherent and more integrative. His captivating and gripping odyssey takes us from Andalusia to Sicily to the Balkans to Britain to France to Germany to Denmark – all places jolted periodically by the tremors of simmering religious discord.

He gives us hope.

Today the story of Europe will be told by the superb narrator Dr. Akbar S. Ahmed himself. But we are also fortunate to have in our midst Dr. Amineh Hoti, who is the associate editor, cinematographer and script consultant of the documentary.

Let me conclude with a phrase I have picked up from the documentary: Fear should not mutate into hatred. 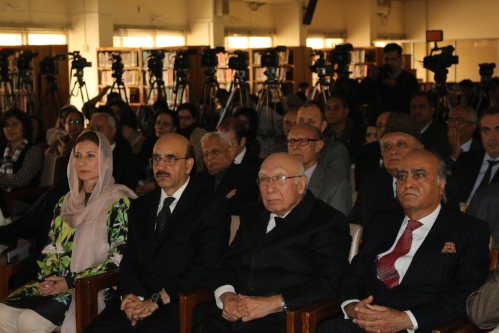 Ambassador Khan’s letter to Ambassador Ahmed discusses his thoughts on the film and the event as a whole, as well as its reception by Mr. Aziz and other top dignitaries in the audience:

Dear Dr. Ahmed,
I am writing to thank you for giving us such a precious gift. The film is a superb work of art. Although a documentary, it is no less than a movie. So gripping and powerful.
Yesterday I saw it and I was mesmerized. Its screening today had the same effect on our guests who attended our public event.  Mr. Sartaj Aziz found it very moving.
Dr. Amineh Hoti was fantastic, as she helped us make meticulous preparations. Her presence and presentation made a difference. The response was effusive and the quality of the guests excellent.
The documentary was very well-received. My take: sensitive; respectful both to Europe and Muslims; detached and objective and yet trying to find common ground;  scientific  but empathetic; comprehensive and succinct covering so many countries and regions in a broad thematic sweep.
Congratulations or any amount of appreciation would not be able to thank you and your professional team enough for what you have done.
With profound gratitude,
Sincerely yours,
Masood Khan

To read the ISSI’s official press release on the occasion of the screening, click here.